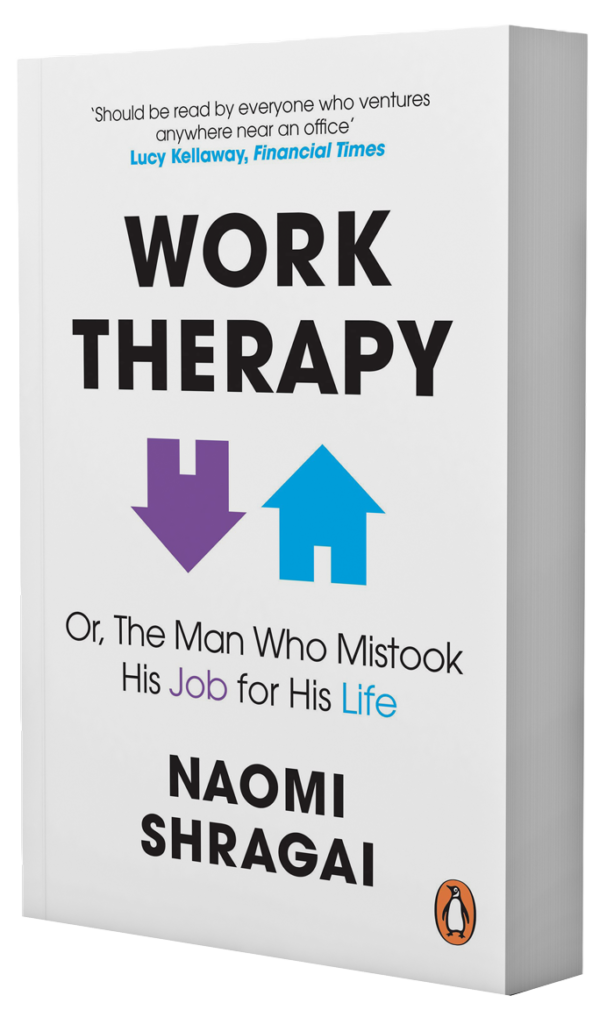 Or: The Man Who Mistook His Job for his Life

How to Thrive at Work by Leaving Your Emotional Baggage Behind

Does criticism from your boss feel more a blow to your self-worth than disapproval of your work? Have you ever felt guilty for resenting a colleague’s success? Do feelings of inadequacy leave you anxious despite evidence that you’re great at your job?

You probably don’t realise it, but every day at work we unknowingly re-enact conflicts, dynamics and relationships from our past, repeating patterns of behaviour that helped us navigate our family lives but which stunt our professional ones.

Whether you want to understand your working self better, or seek hard-earned wisdom on how to have a difficult conversation, plot your next career move, grapple with conflict or cope with an impossible boss, The Man Who Mistook His Job for his Life will help, entertain and inspire you – and make you realise that no matter how much you invest in your career, your work will rarely love you back.

Out Now in Paperback

How This Book Began

The seeds of this books were planted in my mind over 15 years ago when I began to notice people bringing more work-related issues to psychotherapy rather than the usual themes of grief, relationship breakdown or depression. They wanted to talk about how they were struggling with impostor feelings, or unable to deal with interpersonal relationships and gruelling conversations. It was work, rather than their home life, that was making them feel vulnerable. As these themes emerged, I approached the Financial Times with an idea for a feature about fathers struggling to balance home and work life. That article, and the many that followed, touched a nerve with readers. People wanted to understand their emotional lives in the workplace. They were confused, frustrated and fearful, and wanted to understand how their inner lives, or their unconscious, influenced their perceptions of events in the workplace as well as their reactions, decisions and behaviour. Taking the time to examine the origins of their feelings not only helped them cope, but also improved their performance and career prospects.

Praise for “The Man Who Mistook His Job for his Life”

“Miraculous! I read this book in one stretch. Naomi’s book is not only a real tour de force in providing the reader with great insights into the inner theatre of executives but has been written in an extremely captivating style. No question, the author knows how to make the unconscious, conscious. And as Carl Jung once warned, ‘when an inner situation is not made conscious, it appears outside as fate’. People would do well to not leave things to fate but have a serious look at this book.”
Manfred Kets de Vries, Professor of Leadership at INSEAD and author of “The CEO Whisperer”

Work and life are separate, right? Not at all, points out journalist Naomi Shragai in this brilliant book. Our emotional past does not switch off as we walk into the office. Our deep-seated experiences – with sisters, brothers, parents, friends – affect how we are with the people we often spend most time with: our colleagues. A fascinating and life-improving book that might just change your (work) life.
Sainsburys Magazine

“Work is emotional. But the foundational fiction of jobs — that they are separate from the people who do them — causes grief and frustration every day. The gift of this book is to help us understand who we are, who our co-workers are, in the round, as flesh and blood, not economic units of production. It can help managers and the managed, bosses and the bossed, to find in work and in each other the humanity and warmth, growth and forgiveness that this crucial part of our lives deserves.”
Margaret Heffernan, author of “Wilful Blindness”

“A must read for those who care about the human side of work, which should be all of us. She brings her deep understanding of human behaviour to this wise and illuminating – and eminently readable – account of some of the most common situations in the workplace. Clearly experienced in the ways of leaders and their teams, Shragai offers insights as well as practical suggestions for how to deal with those difficult people and interactions that are usually so vexing and that detract from finding satisfaction in the office. She also inspires curiosity about ourselves and about what work means to us, and how we play out old dramas on the stage of work everyday.
Kerry Sulkowicz, President of the American Psychoanalytic Association

“A great book, packed with insights and evocative human stories.”
David Tuckett, Director of UCL’s Centre for the Study of Decision-Making Uncertainty

Excerpts from the Book

While we believe our decisions are driven by rational thoughts, more often than not it is our feelings that are leading us. It is much easier to go by our ‘gut instincts,’ how we feel, than to take the time to think things through carefully. Thinking requires time and effort, and often creates confusion or ambivalence, states of mind we prefer to ignore. Furthermore, our feelings at work have multiple meanings. At one level, we could accept them at face value and allow them to lead us. That is, if we are exhausted, we need to recover; if we are suspicious of a client, perhaps we do need to be more cautious; if we are distraught at not being promoted we might need to work harder. Feelings can be a useful guide, yet they can also mislead. Optimism and desire, for example, can push a project forward but too much can mean signs of dangerous risk are ignored. Pessimism can alert you to potential pitfalls but it can also kill off ideas before they have begun. When we are hijacked by strong feelings it might mean we are operating more in the past than in the present. Being ignored by your manager is perhaps a reason to be upset but if you flip to rage to the extent that you lose all motivation at work, then you need to examine where those feelings originate. The current circumstances might be triggering repressed feelings from the past when you were treated badly or neglected by your parents. In other words, your feelings are misleading you.

Like many psychological traits I discuss in this book, overachieving runs along a continuum of healthy and productive at one end towards destructive at the other. Although where one is on this continuum is influenced by external factors such as one’s profession, the employer and changing societal norms, I believe it is the individual’s internal drives that can send them over the tipping point towards the harmful end. While they may not need more money nor to work so hard, they cannot stop. It is these people I will refer to as neurotic overachievers. Although the compulsion to achieve is common and easy to recognise in investment banking and other elite organisations, it also exists elsewhere. Indeed, anyone who uses achievement to solve a psychological problem to the extent that it harms them, people close to them or their business, is a neurotic over-achiever. Fear of failure is an underlying driving force. Failure implies weakness, a trait they despise and deny in themselves. They believe others would also find their weakness undesirable – who would be interested in a failure? Furthermore, any setback is not simply a failure but has the potential to wipe out all previous achievements. It is when ‘winning’ becomes the sole solution to problems that difficulties arise and this is what separates normal achievers from neurotic ones. Traumatic experiences in early life can leave individuals struggling to regulate their mood. Feeling dreadful as a result of failing, for example, is terrifying if one lacks the ability to overcome this strong emotion. When achieving becomes their sole strategy for easing or regulating such feelings, neurotic overachievers never learn how to tolerate them.

If conflicts led to dangerous or even violent outcomes in your family, any differing of views subsequently might feel threatening. If this describes your family history, think back to how you responded. Did you meet fire with fire, run for cover or attempt to protect the person who was being attacked? Now consider how these experiences influence your response to disputes at work. Do you find yourself playing the same part in your professional life that you had in your family? Perhaps you were the rescuer, the scapegoat or mediator. Do you adopt the same role at work? If the answer is a resounding ‘yes,’ then ask yourself if it is working well for you or not. Here, for instance, is the blueprint that I inherited. My parents were Hungarian immigrants in California. They argued often when I was growing up but only in Hungarian, so the meaning of their rows was a mystery to me. It is often the case in immigrant families that it is the eldest who speaks the parents’ language in order to translate, while the youngest – in this case me – is left out of the loop. So although I hadn’t a clue what they were arguing about, I saw that tempers ran high, as did the volume of their voices. Nothing appeared to improve after an argument – quite the contrary, as I observed their bad moods everyone seemed worse off and retreated to separate rooms. As I was a helpful child, my first approach was to try to understand what was going on. Gathering all my strength, I would stand up, look them both in the eye and demand they speak English. At this point, they would pause, momentarily look towards me in disbelief and then immediately revert to shouting in Hungarian. I eventually gave up. As a result, I came to believe that disagreements quickly escalate and leave everyone worse off, including and especially myself. I was also baffled as to how to resolve them. This undoubtedly influenced my eventual desire to pursue a freelance, self-employed career where I was less likely to be faced with interpersonal conflict. Learning to be objective and reflective, and even welcoming differences of opinion, came only after years of self-analysis and determination.